The Wayne & Layne store will be closed August 4th - 11th. Any orders placed during that time will ship on August 12th. 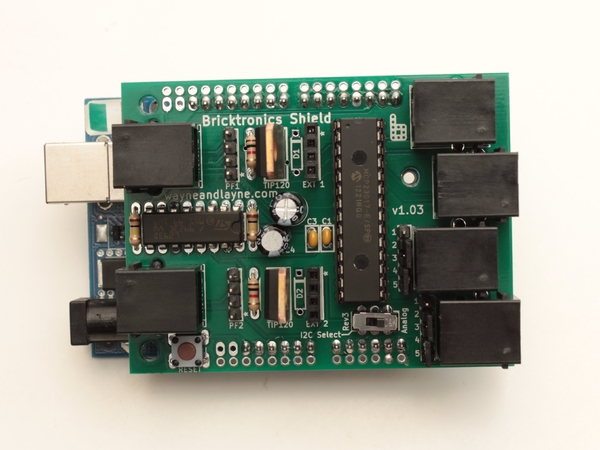 Use the Bricktronics Shield Kit to connect up to two LEGO NXT motors and four LEGO NXT sensors to an Arduino.

All you need to do is solder the kit (if you don't get the pre-assembled version), download the easy-to-use Arduino library, check out the examples, and start building!

We are currently out-of-stock of the unassembled Bricktronics Shield kits, but we stil have pre-assembled shields available.

See it in action!

Reading a color sensor when a button is pressed

We have many more video examples with code and instructions.

The contents are also listed and explained individually on the Parts List portion of the Bricktronics Shield project page.

If you are interested in working with non-NXT sensors and motors, or just want to be able to plug wires into your Arduino even when a shield is attached, then it may be useful to install "stacking headers" instead of the standard male headers when assembling your kit. The Bricktronics Shield PCB also includes a row of holes adjacent to each row of header pin connections (which work well with standard 0.1" female headers), for making temporary or permanent electrical connections to the Arduino. However, be aware that the Bricktronics Shield uses almost all the Arduino pins for various functionality (pin-use listing available here), so there are not many free pins left. However, some pins (notably D0 and D1) are unused, which enables the use of chips and shields that only use pins 0 and 1 (serial port RX/TX) or only use the I2C pins (I2C allows multiple chips per bus).

Motors need more power than can be supplied by a USB cable. You typically want about 600 mA per motor, but up to 1000 mA peak per motor. Our 9V 2A wall adapter works great, but any 2.1mm 9V adapter with at least 1.3A should work. If you want to power your creations on the go, our 6 AA battery pack works well.

It usually takes under an hour to build, but it may take more or less time depending upon your experience with soldering.

We are currently out-of-stock of the unassembled Bricktronics Shield kits, but we stil have pre-assembled shields available.

When you're finished building the kit, let us know how it went! We use feedback to improve future versions of our kits, and the warm fuzzies help us make more kits! Let us know in the forum or via email.

A portion of the profits of this kit go to John Baichtal, an author of the Make: Lego and Arduino Projects book.

Wayne and Layne, LLC and our products are not connected to or endorsed by the LEGO Group.
LEGO, Mindstorms, and NXT are trademarks of the LEGO Group.